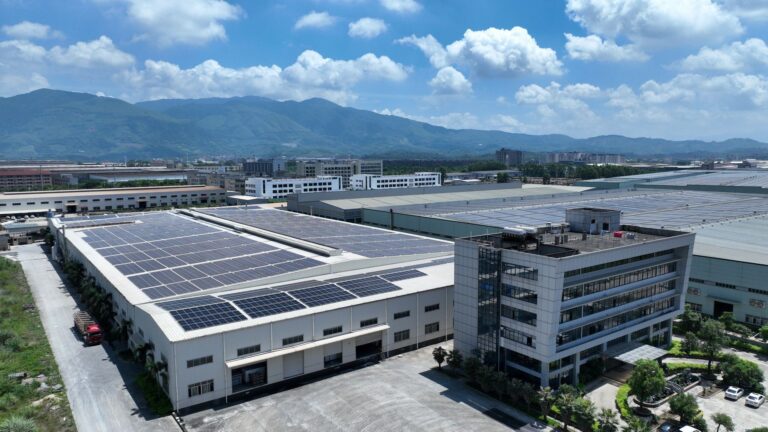 At present, the world is progressing towards its goals of Peak Carbon and Carbon Neutrality. Using technological advances and innovation to improve the comprehensive green utilization of materials is an important issue for the high-quality development of the building materials industry. In response to the global development of green buildings and the goals of Peak Carbon, PANMIN took the initiative to seize opportunities and made contributions to the goals of Peak Carbon and Carbon Neutrality by constructing a clean energy photovoltaic power generation project. The project will help to reduce carbon emissions and create a more sustainable future. PANMIN's commitment to environmental protection is an example of how stone businesses can play a role in meeting China's climate goals.

On June 24th, 2022, the first phase of the distributed photovoltaic power generation project invested and constructed by Fujian PANMIN Co., Ltd. was successfully grid-connected and power generation. The project is located in Jiulong Industrial Park, Hua'an Economic Development Zone, Zhangzhou City, Fujian Province, China. The total installed capacity is 2295.54KW. After commissioning, it is estimated that the annual power generation will reach 2.68 million kWh. According to the saving and emission reduction benefits of electricity saving, it is estimated that carbon emissions will be reduced by 2672 tons per year. Each kilowatt hour saved corresponds to 0.4 kilograms of standard coal or 0.379 liters of diesel saved. It can also save 2.63 kilograms of carbon dioxide emissions for every liter of diesel saved. It is equivalent to planting a tree for every 25 watts saved. This move will improve the economic efficiency of the project, promote enterprise transformation and upgrading, build a low-carbon energy system, and play a due role for the stone industry in carbon peak, carbon neutrality and environmental protection. 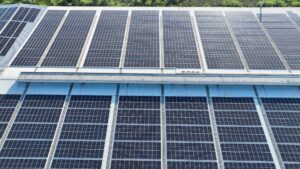 What is photovoltaic energy?

Solar photovoltaics, also known as solar PV or solar panels, is the conversion of sunlight into direct current (DC) electricity using semiconductor materials that exhibit the photovoltaic effect. A solar PV system consists of solar panels, solar inverters, and other electrical components. Solar panels are the core of a solar PV system and are made of semiconductor materials such as monocrystalline silicon, polycrystalline silicon, amorphous silicon, and cadmium telluride. With the world's increasing push for renewable energy in recent years, the development of the solar PV industry has been rapid. Click here for more details.

Solar PV is not only an energy-saving transformation of equipment for the stone industry, but also an improvement in production efficiency. It contributes wisdom and strength to lead the stone industry to achieve the goal of "carbon peak, carbon neutrality".

PANMIN is mainly engaged in the research and development, production, sales and service of artificial quartz stone decorative materials. The products are widely used in the decoration of residential and commercial places such as family houses and shopping malls. It has industry-leading technical strength. As a partial substitute for natural stone, the artificial stone developed and produced increases the utilization rate of natural stone and reduces the pressure on the natural environment. The advantages of comprehensively utilizing resources make artificial stone an irreplaceable role in environmental protection and energy conservation, which is a true green building material and environmental protection new material. Because the energy consumed in the production process is mainly photovoltaic power generation, artificial stone has ecological environmental protection attributes from the moment of birth.

PANMIN is well aware that the stone industry is a resource-based industry that has always been plagued by environmental pollution and the lack of comprehensive utilization of resources. For the manufacturing industry, carbon neutrality is a big proposition, including the power curtailment order issued by our country last year, which is actually correcting the early extensive development. Only by doing industries that conform to the direction of "carbon neutrality" can it be possible to revive new vitality, make efforts to transform, stimulate greater market potential, and develop in a long-term and healthy way in the future.

PANMIN is an innovative manufacturer of artificial quartz slabs. PANMINQUARTZ® is man-made quartz surfaces from PANMIN, which can be applied in residential and commercial interior decoration including kitchen countertops, bathroom vanities and office table.

Currently, we have three factories, two in China and one in Cambodia to provide sufficient services to our customers.

For more information about PANMIN, please refer to our contact page and we should get back to you ASAP.

We are here for you.

Search products, projects, and news from PANMIN.
[wpdreams_ajaxsearchlite]
Or check out some of our featured products?

Please leave message below and we will get back go to you ASAP!
We use cookies to ensure that we give you the best experience on our website. If you continue to use this site we will assume that you are happy with it.OkNoPrivacy policy